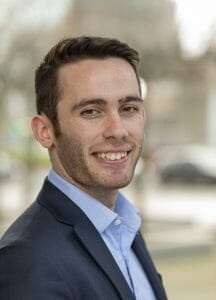 You Visibly See the Difference You Make

In a traineeship at NN, you hit the sweet spot of responsibility where you have the power of making a large tangible difference in the company’s profits if you’re successful, but if you make mistakes, it’s expected. Your team mates will reason that you’re a trainee, you’re just starting out and still learning. This runs contrary to many alternative starting positions at other companies, where you may be scared to make a mistake. At NN, you feel comfortable enough to be different and make that change happen rather than fit in with what’s happening.

How I Had Space to Fail and Learn

Let me give you an example of a mistake I bounced back from. I was an equity analyst in one of my rotations where we had a service provider that we used, among other things, to conduct surveys of the customers of the companies we were researching. My boss gave me the full freedom and responsibility of researching and pitching the stocks I was interested in, in any way I chose. Our contract with this service provider entitled our team to 1 survey per year. I did not know this and used up the team’s survey for the whole year. Of course, my boss was not happy. We talked about it and agreed to keep each other informed prior to launching such surveys in the future. In turns out that the survey was successful and I kept building from there. We’re now investing in the stock I proposed.

The quality of the work done at NN during your traineeship will vary significantly from many of the large financial institutions out there. Other companies generally hire loads of graduates who often start the initial years of their careers doing low importance, easy work that is not befitting of their high level of education. Not at NN. NN only hires a few handfuls of trainees per year, which get spread out over a company of 14,000 people. This means that trainees are a rare breed in this company, where there are many more potential assignments than trainees. This means that there are loads of managers who compete for trainees by offering great roles. In each rotation I’ve done, I’ve felt like an experienced hire rather than a graduate with the level of importance my contribution has.

Importance of Your Opinion

This all ties in with the overall culture at NN. One of the key selling points about working here is that we all feel like equals, we’re not the type where the boss dictates exactly what’s going to happen and you just execute his plan. You will have your opinion, the company leaders will ask it, and they will act on it, putting their money where their mouth is to back your ideas.